LOOKING FOR A NEW HOME LOAN?

Just give us a Missed Call on 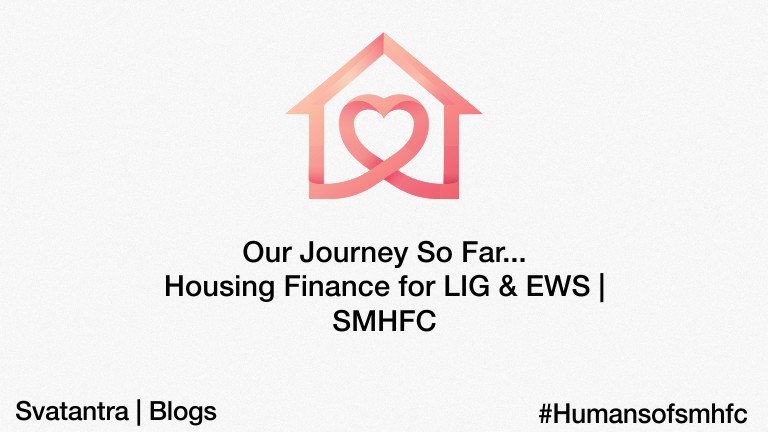 Svatantra Micro Housing Finance Corporation Ltd. is a company, evolved out of a social problem of financing the housing needs of the informal sector. When SMHFC came into being in 2008, there were no Housing Finance Companies that would finance individuals working in the informal sector in urban settings. Catering to this segment meant providing loans to those who have a stable income and can easily afford an EMI for a housing loan but do not have income proofs like salary slips to prove their income.

SMHFC was the first company to venture into providing long term housing finance for purchase of houses to this segment. The challenge was not only in assessing credit of these customers, but also to find adequate supply to meet the demand.

Why Svatantra MHFC came into being

While researching, it was found that according to the National Sample Survey Organisation (NSSO) report, there were over 80 million people who did not have access to basic amenities in India. The slum population was also increasing and as per the Town and Country Planning Organisation (TCPO) estimates, over 61.8 million people in India were living in slums (This might have increased now).

“The housing problem is very real and visible, especially in a city like Mumbai. There is certainly aspiration to own a home, but without finance, there is no way to realize the aspiration”, the former founders of the company said while talking to Thomson Reuters Foundation, a London based news conglomerate.

“Of India’s 470 million-strong workforce, about 90 percent is in the informal sector. They include domestic helpers, street vendors, daily wage earners, and small business operators, who may have no collateral and whose incomes are irregular. They have few options besides borrowing from money lenders or their employers. Hence Svatantra Micro Housing Finance Corp. was formed to enable home loans to low-income and informal workers.”

An affordable home is typically about 250 sqft (23 sqmt) in size and can cost up to 8-10 Lakhs. It is aimed at families earning 8,000-25,000 rupees a month and is usually located on the outskirts of the city where land is cheaper. Developers including the Tata group, Mahindra, and TVS group have entered the affordable housing market, enticed by government incentives and future potential. These big firms have enhanced the quality and reputation of affordable homes, which were once described as “vertical slums”.

Looking at this scenario, it was clear that there was a major requirement for a Housing Finance company to bridge the existing gaps between the country’s growing housing demands and availability/accessibility of easy finance for home purchase to the informal sector.

Hence SMHFC came into being!

Even now more homes are desperately needed. Already, one in three Indians live in cities, many in crowded slums and other informal settlements. Every year, tens of thousands of villagers migrate to cities in search of jobs, and the pace of urbanization is set to rise.

India has a shortage of about 20 million urban homes; the shortfall disproportionately affects families earning less than 16,000 rupees a month, according to KPMG consultancy.

The Prime Minister has made affordable housing a priority, offering incentives such as subsidized loans to meet a 2022 target of ‘Housing for All’. The government plan aims to create 20 million new urban homes and 30 million rural homes.

This provides an immense opportunity for Svatantra MHFC to grow!

The main objective of the company is to help people, who otherwise would not have access to formal banking, to own a house.

Our typical customer can be

SMHFC Finally got wings to fly!

Ramesh Ogale, Director - Sales & Projects at SvatantraMHFC recalls, “In the middle of FY-19, SMHFC was fully acquired by Svatantra Holdings. As next steps, a senior management team was constituted, supported by a larger management team consisting of several functional heads.” This was a very important step in the transformation and growth of the company as a whole.

As Jayesh Shah, Director - Credit & Operations at Svatantra MHFC says, “I guess our journey over the first 10 yrs was about experimentation, about finding the right product mix, right processes, right capital mix, the right pricing, and the right distribution for a housing finance company in this segment.”

With the advent of new promoters, a lot of new changes came in, like launching new products, focusing on recruitments to support the expansion plans, and training new employees. It was like a breath of fresh air and new energy that encompassed the whole company and it felt great.

“A brand new vertical, the BLC (Beneficiary Led Construction)was added to our kitty apart from the existing projects led approach, where we expanded. With the new energy we felt confident to spread our wings to Tamil Nadu.”, Ramesh highlighted.

“The next challenge was growth that is where the new promoters have made a huge difference. The team is now focussed on a strategy required for an aggressive growth-oriented business plan. The approach to achieve this is a collective and participative way. The team today feels it is part of the solution to achieve the budgeted growth and is now equipped with the tools MIS, training, and adequate finance for the change. What is most heartening is the company under the new leadership, has not lost focus on the mission with which it was started. To serve the underserved.”, Jayesh added.

Svatantra MHFC is very excited and prepared to overcome whatever new challenges they might face on their way to fulfill their mission of helping millions own their dream home!